skip to main | skip to sidebar

Think ahead. Think Smart. Shop early. Save Money. Due to the economy, many of our suppliers will be offering early order discounts for holiday gift giving. Inquire today ........ we have already received discounts for gifts, desk accessories, tower gifts. 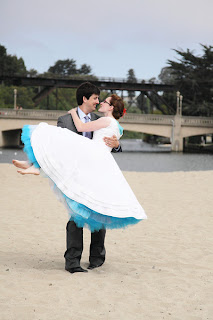 This summer one of our staff got married. Emma started in the summer of 2009 as an intern working during summer break in our office. The bride and groom attend Brigham Young University in Provo, Utah. Congratulations again Emma and Dean. Emma still works for us as a virtual assistant.


The winner of the $25.00 WaWa gift card contest "Like Us" on Facebook is:  Jigsaw Marketing Solutions in Bel Air.  Congratulations!

We are gearing up for the 4th Quarter! Check our facebook page, blog and follow us on Twitter for upcoming specials for the Holiday season. Also, tips and ideas on growing and marketing your business.

Simple Ways To Turn One-Time Customers Into Regular Ones

One-time customers are often given little attention by business owners. Many companies fail to recognize the reason these individuals spend money on their product. Before you toss that customer out the window think about the potential revenue you are tossing away too!

A one-time customer provides so many benefits over a new customer. They get it. They are familiar with your product and services, you just don't need to convince them. They have been there, done that. One-time customers also understand the type of business you are.

Start thinking about promoting your brand. One-time customers will quickly recognize your brand if they see it on a pen, pencil, grocery bag, post it note or other ad specialty item. Sometimes just getting your name out there will convince them to purchase your product again. Offering promotional products is a great way to boost customer retention and repeat business. People love free items. Even a pen.

The more you remind a one-time customer of their experience with your company, the higher the chance to get them to buy again. You leave yourself vulnerable when your business depends on new clients. Building stable, loyal, repeat customers in today's economic environment is key. It will help maintain at least a basic level of income and keep your business alive during down times.

Another way to get one-time customers to come back and join your database is to offer surveys.

Getting feedback is key. Incentive to get them to fill it out by offering to enter their name in a promotional drawing.

Give your customers something they can't get anywhere else. Stellar customer service. Most companies sell the same products and services. Give them a reason to remember you.

Sell the experience. Make it easy to do business with you. Always have fresh, new ideas. Your customers are overloaded. Make it simple and easy for them.

Remember names of your customers and remember what is going on in their lives. It will increase customer loyalty.

Watch your ego! You are thinking well, my clients keep hiring me so I can now bring in anyone to do the work. Be very careful who you bring in - experienced staff is key otherwise you can lose that one-time customer who became a regular customer.

We all look for customers for life. You never want to lose a customer that you worked so hard to keep. Serve them well and they will reward you with loyalty.


This article was written by Patricia Desiderio, founder and owner of Patty's Gifts and Basket LLC, 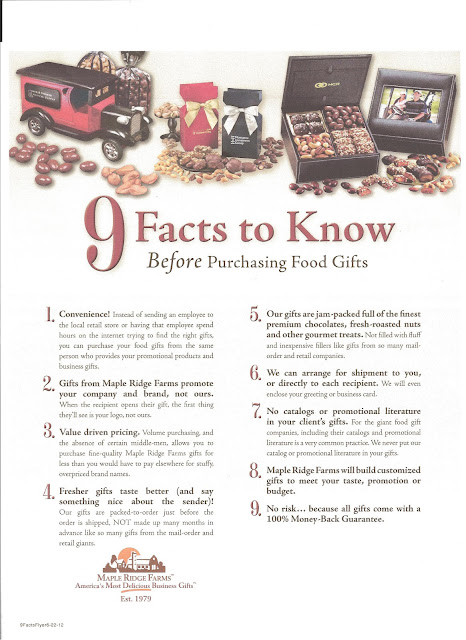 Posted by Patty's Promotions at 1:54 PM No comments:

Posted by Patty's Promotions at 11:40 AM No comments:

What a challenge in today’s world: Are we in a recession, out of a recession but waiting for the double dip everyone is talking about? OR has the recession lingered and we never came out of it (despite what the White House reports).

1) Use them as invitations
Instead of giving them away without any specific reason, try using them as invitations for a future event. For example, you could send across a box of chocolates with a card including a message: "We are pleased to invite you to celebrate our company’s 25th year of operation."

2) Sponsor Events
Try hosting an event to acquire more leads for sales and impress existing clients and customers. You can organize a fund raising event for a non-profit in the community. Give-away promotional merchandise at the event. Give each participant a gift bag with efficient products that they could use frequently

3) Send Direct Mailers
Send mail to existing clients, investors, or customers with a thank you note imprinted on it. Or introduce your company and its products or services by sending free gifts or samples to potential customers. The key here is to have a plan in place for follow-up.

4) Socialize
Do not hesitate to discuss your promotional ideas whenever you get an opportunity to socialize with people. The art of networking is to let everyone you meet (even in a social setting) know what you do for a living.

5) Analyze
Analyzing promotional products is extremely important to perform better in the future. Request your customers to submit feedback on the gifts they received from your company. This will help you evaluate your efforts. Use survey monkey to get feedback from your customers.

Posted by Patty's Promotions at 12:35 PM No comments:

In today’s world, with global companies, as well as countries populated and influenced by different religions cultures, it is important to develop good business relationships by taking the time to learn more about the person you are doing business with.

Chinese Culture: Countries in the world with a Chinese cultural influence, accept gifts with a reserved demeanor. In order not to appear greedy, a gift will not be immediately taken, but refused three times before finally being accepted. If you are presented with a gift, follow the same process of refusing it three times then accept it with both hands. You will also not open it, but wait until later.

In China, official business policy considers gifts as bribes, which are illegal. Though this policy is softening, there may be times when a gift you offer will absolutely not be accepted.

In Chinese culture symbolism is important, with colors and numbers having special meaning. Red is a lucky color. Pink and yellow represent happiness. The number eight (8) is the luckiest number. The colors black, white and blue and the number four (4), or four of anything are negatively associated with death and funerals.

Sharp objects like knives or scissors represent “a severing of a friendship or relationship” including a business relationship.

Japanese Culture: In Japan gift giving is an art form. It represents respect, gratitude and friendship. For a first business meeting, come prepared with a gift, a quality gift that is not extravagant. When you offer your gift, hold in both hands and bow. In Japan, symbolism is important. A gift with a pair of items is considered lucky, but sets of four or nine are unlucky. Plus, the number four (4) also means death. The color red is associated with funerals. So do not give a pen with red ink. And do not write out a card using red ink.

The Japanese will refuse a gift once or twice before accepting it. And it will not be opened in your presence. When a gift is offered to you, follow the same ceremony.

Latin Culture: Latin cultures don’t have formal or traditional ceremonies surrounding gift giving. However, business relationships are developed as personal relationships. And in order to build a strong and lasting friendship, gifts are a thoughtful way to make a good first impression. If you are a man giving a gift to a female, in order for the gift not be construed as a romantic overture; tell her you’re delivering the gift on behalf of your wife or assistant. Symbolism in this culture will also influence the choices you make for gifts and wrapping paper. Black or purple paper isn’t used because it’s used during Holy Week. As in other cultures, sharp objects should never be given, since they represent a severing of a relationship.

Jewish: Orthodox Jews are not allowed to eat pork and shellfish. The dietary laws are very specific regarding which foods are acceptable to eat, and their processing and preparation. Because wine is used in religious ceremonies, it’s required to be kosher even for social drinking. So all wine and wine-based drinks consumed must be kosher, prepared and bottled by Jews. If you want to buy a gift of food or wine, it is best to shop at a kosher store.

Muslim: In the Muslin culture, the Koran forbids alcohol. Gifts of liquor or any product that contains alcohol such as perfume would never be selected to give. Also forbidden are products or foods from scavengers, which include pork, birds and shellfish. So a leather item made from a pig skin could not be given. Other categories are also not appropriate for gifts. Dogs are considered unclean, so any dog item, even something with a picture of dog would not be given. The same applies to knives, considered severing a relationship.

A good gift for Muslin is a compass. Each day he must face Mecca for prayers.

Gifts are presented using the right hand, or both hands. The left hand is never used alone to hand someone a gift, as it’s considered unclean.

Hindu: In the Hindu culture the cow is sacred, plus fish and all animal products except milk or butter are shunned. Therefore, you would never select any leather or food product from these categories. Most Hindus also don’t drink alcohol.

Gifts are given and accepted using your right hand, or both hands, never only your left hand, as the left is considered unclean since it’s used for personal hygiene. And gifts are not opened at the time they’re received.

European Root Culture: Cultures without strong gift giving traditions, European cultures and countries influenced by these cultures, don’t use gifts as an integral component of a business relationship. This doesn’t mean that an occasional and appropriate gift is not appreciated.

Contact: www.pattysgiftsandbasketsrus.com or www.pattyspromotions.com.
Posted by Patty's Promotions at 2:47 PM No comments:

Patty's Promotions
We are a promotional products and gifting company serving the business community.